Saturdays are my free days, so today I explored Sapporo city centre. I was initially planning to rent a road bike and go cycling, however the rental shop was closing early and a day’s rental would not have been value for money. I will do it another day. A friend from back home who is also in Sapporo kindly lent me her bike for the time I am here. 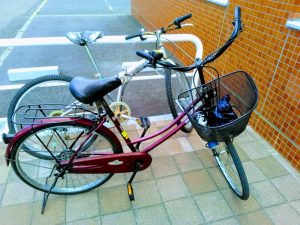 The city centre is only 3.5 miles away, but it took me an hour to get there because my sense of direction is appalling. Hooray for Google maps. I parked the bike at Hokkaido University, because parking it in the city centre costs money, and if you do it in an unauthorised place you get fined. The university campus has an on-site museum, where I earned a prehistoric rock in return for filling in a survey. That’s Ailsa’s present sorted. 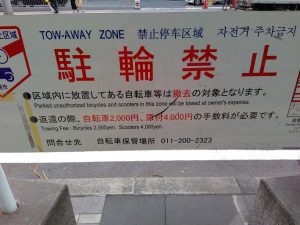 Walking around a Japanese city is always interesting due to all the busyness and the abundance of skyscrapers. Despite the high volume of both traffic and pedestrians, there remains a certain order about the place compared to the likes of New York, which I just found to be noisy and stressful. 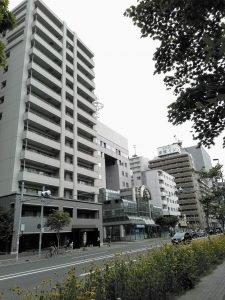 By the time I arrived I was starving and went on the hunt for something cheap to eat. Naturally the food in the touristy areas was more expensive than out in the suburbs where I am staying. Even the university café was charging 800 yen (£5.50) for an omelette. I ended up eating in an Irish pub in Sapporo station because it was the cheapest I could find. I had Japanese curry with rice for 500 yen (£3.50). How very Irish. Japanese curry has a consistency more akin to soup and you are given a spoon to eat it with. It was delicious. 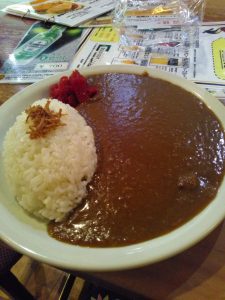 Sapporo Station is very impressive both inside and out. The exterior is an overwhelmingly large building, with an observation deck at the highest point. I will pay to go up it on another day off. Inside the station there is a maze of shops (with free samples!!), information booths, over and underground platforms and restaurants. 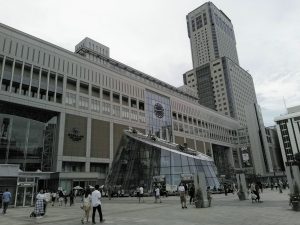 I then walked to Odori Park, a large yet narrow park that runs down the middle of the city. It is a nice splash of colour amongst the concrete grey. 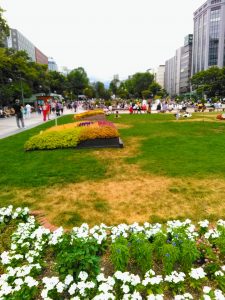 Just off Odori Park is a Rabbit Café called Mon Lapin. In Japan the majority of apartment blocks don’t permit pets, thus animal themed cafes are very popular. You pay for a certain amount of time and get to cuddle as many animals as you want. They have cafes for cats, dogs, hedgehogs, owls, and most importantly, rabbits. I paid 1026 yen (£7) for half an hour. It was rather expensive, but worth it considering it’s not something you can do at home. The rabbits are kept in hutches and there is a room in which they can run free. You can ask to have a rabbit on your lap. I cuddled 7 rabbits in my half an hour which felt like 5 minutes. They also sell various rabbit themed items. The place is just one giant, fluffy cash trap – and I’m ok with that. I can’t go too often though or I will blow my recreation budget! 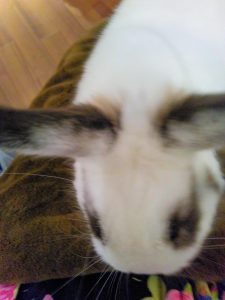 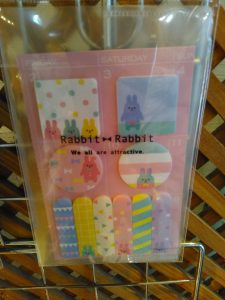 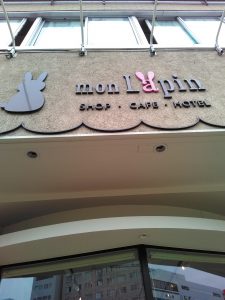 My last stop was the Sapporo branch of Animate, a chain of anime/manga merchandise shops. Even better, next door was a second-hand shop where I bought books that were 1500 yen in Animate for 100 yen, in great condition. 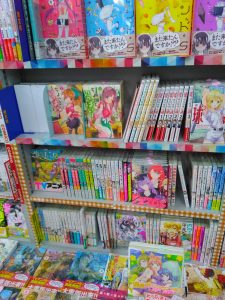 I cycled back, getting horrendously lost as per usual.  When I finally made it back it was 7pm. It turns out this is a great time to get bargains at the convenience store – all fresh food had at least 20% off. I got a lovely do-it-yourself ramen kit for 170 yen (£1.20).