Whenever you think of Hiroshima, the automatic association is the atomic bomb. Much of the tourism is centred around it, such as the Peace Memorial Park, which is definitely worth a visit. However, because I already went there three years ago, this time I wanted to discover what else the prefecture has to offer. Here are some of the highlights. 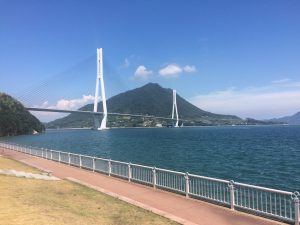 The Shimanami Kaido is a 60km cycling road between the towns of Onomichi and Imabari. It spans six islands and crosses some fantastically designed suspension bridges. The views of the Seto Inland Sea are stunning. There are several options for bike rental; you can get a city bike for as little as £15 a day, or you can go to the Giant/Liv shops for a road bike. I rented a carbon road bike with disc breaks for approximately £100 for 48 hours, including helmet, lock, lights and spare tube.

There are many hotels and hostels along the route that are specifically geared towards cyclists. There is even a Cyclists’ Hotel in Onomichi where you can keep your bike in your hotel room, but sadly I couldn’t afford it this time. Also recommended is the aptly named Cyclists’ Sanctuary, roughly halfway through the route, which has several gift shops, cheap cafes and free bike repair stations. 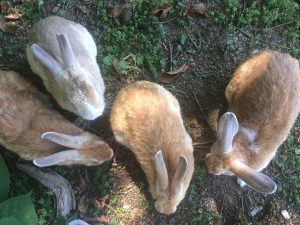 This recommendation will come as no surprise to anyone who knows me. Ōkunoshima, aka Rabbit Island, is a small island with over 1000 rabbits. The rabbits rely upon tourists for food and thus are very accustomed to people. They will happily be stroked as long as you have food! There is one hotel on the island with a café and rabbit gift shop, which is very bad for my bank account.

The island has very interesting history – during WW2, it officially didn’t exist on any maps because it was the location for a chemical weapon factory. There is a museum on the site of the derelict factory. Some theorise that the rabbits are the descendants of animals used to test the weapons, another theory is that an elementary school released their pet rabbits on the island during a school trip. 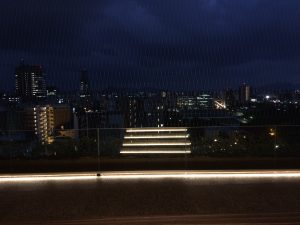 In Hiroshima City itself, there is a viewpoint building called Orizuru Tower. There are several aspects which make it better than your average city viewpoint. The observation platform is entirely open – it sounds cheesy, but it is lovely to feel the wind in your hair as you lie down and look out. They have lots of cushions to lie on. The nice atmospheric music completes the experience.

Another reason why I liked it so much is because you can slide down all 12 floors instead of taking the stairs. Lots of fun, but I was in short sleeves and ended up with a friction burn. Note to self – long sleeves next time.

If you present either a foreign passport or Japanese student card, you save 800 yen.

That completes my list for this trip, although there is so much more to discover. I’ll just have to go back…